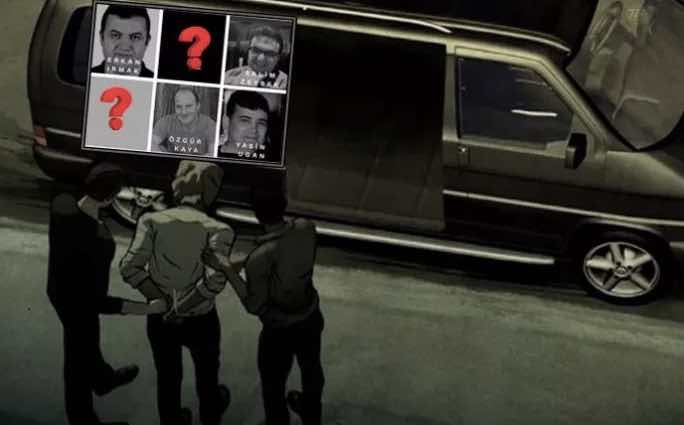 Families of four Gülen followers who appeared in police custody after being missing since February revealed that their loved ones might have been subjected to torture.

The Ankara police on Sunday night called the families of Salim Zeybek, Özgür Kaya, Erkan Irmak and Yasin Ugan, who were abducted by police pretenders according to eyewitnesses, stating that they were in police custody due to an investigation into the Gülen movement.

On Monday the police allowed families to see their loved ones for only five minutes, while delaying visits from lawyers.

Aycan Kaya, the wife of Özgür Kaya, told the Artı Gerçek news website that she could not see any physical marks of torture but that her husband had lost a great amount of weight and refused to answer questions about his previous whereabouts.

Mikail Ugan, the brother of Yasin Ugan, also said his sibling had lost weight and looked dull and colorless during the meeting.

According to human rights activist Ömer Faruk Gergerlioğlu, who followed the cases from the beginning, the prosecutor denied requests for full physical and mental examinations of the suspects.

“I talked to the families,” Gergerlioğlu said. “[Their loved ones] appeared to be weak and were hesitant to talk, and they demanded the closure of petitions to international bodies [about their abduction cases].”

Since a failed coup in Turkey in July 2016,  at least 27 abductions have occurred, according to families and eyewitnesses.

Two of them were able to flee Turkey and told the foreign press they were forced to stay at secret sites where they were subjected to torture and ill treatment by intelligence officers.

They were reportedly forced to give false statements against other Gülen followers.

Zabit Kişi, who disappeared for more than a hundred days after he was reportedly turned over by Kazakhstan to Turkish intelligence and put on a plane to Turkey, previously revealed that he had been tortured during the time he was missing. In a written complaint filed with a high criminal court, he provided a detailed description of the physical and psychological abuse he had been subjected to.

Ayten Öztürk, who was detained in Lebanon in March 2018 for alleged membership in the Revolutionary People’s Liberation Party/Front (DHKP/C), also claimed at a hearing in February that she was tortured for six months at a secret center in Ankara run by Turkey’s National Intelligence Organization (MİT) over her alleged links to an outlawed leftist group.