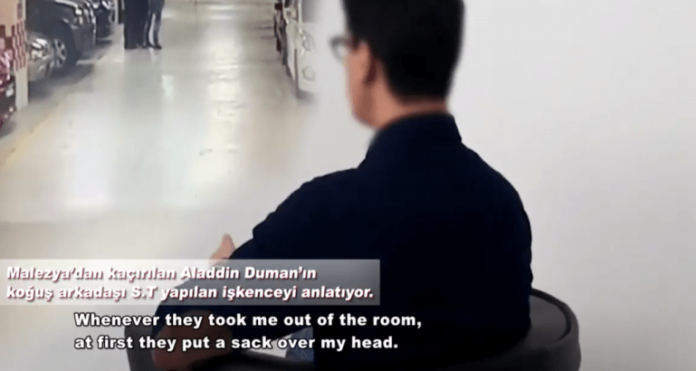 Alaaddin Duman, a teacher in Malaysia who in 2016 was abducted by agents of the notorious Turkish National Intelligence Organisation (MİT) from Malaysia’s capital city of Kuala Lumpur over alleged links to the Gülen movement, has been subjected to beating, torture, death threats and staged executions during his pretrial detention in Ankara, according to his cellmate.

His cellmate, identified only by the initials S.T., who has recently been released from jail, told exiled journalist Fatih Akalan during a video interview on Saturday that Duman was threatened with death and subjected to staged executions on several occasions.

S.T. also called on foreign governments to avoid extraditing alleged followers of the Gülen movement to Turkey where they face similar treatment.

Duman (47), one of founders of the Time International School, and Tamer Tıbık (43), the general secretary of the Malaysian-Turkish Chamber of Commerce and Industry — Turkish nationals and believed to be affiliated with the Gülen movement — were kidnapped on Malaysian soil in late 2016.

Duman and Tıbık were taken to a remote wooded area, subjected to torture and abuse and later turned over to Turkish officials to be taken back to Turkey. Both are currently locked up in Ankara’s Sincan Prison on trumped-up charges of terror.

The UN and other intergovernmental organizations as well as credible NGOs such as Human Rights Watch (HRW) and Amnesty International have all reported widespread torture and abuse cases in Turkish prisons and detention centers. There have been other cases of attempted kidnapping in Malaysia as well according to reports received by SCF.

Early on Thursday, Kosovo police illegally detained five teachers who used to work at schools affiliated with the Gülen movement and an allegedly movement-affiliated doctor and handed them over to the Turkey’s MİT agents.

So far , a number of countries including Saudi Arabia, Malaysia, Georgia, Pakistan, Sudan and Myanmar have handed over academics, businessmen and school principals upon the Turkish government’s request despite the fact that some of those victims already had refugee status with the United Nations.