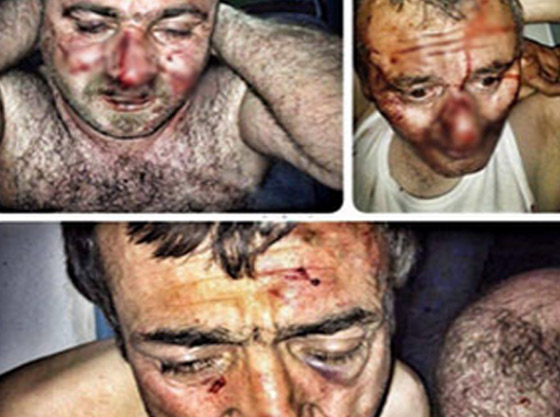 Four villagers tortured for allegedly attacking the District Police Department of Gevaş, in the eastern Van Province of Turkey, are released. The governorship of Van had made a false statement claiming that the villagers had admitted the accusations.

Four villagers who had been detained while gathering mushrooms in the Gevaş town in the eastern Anatolia for allegedly attacking the District Police Department of the town are released. The villagers had been tortured for ‘admitting their crimes’ according to the Van governorship.

22 year-old Servet Yildiz and 24 year-old Serkan Celebi have applied to the prosecutor asking to present a criminal report against police officers. Claimants have also presented a medical report about being beaten.

Yildiz explains: “We were passing by Gevas Police Department. An armored police vehicle stopped and blocked our way. They opened the vehicle’s door before stop and hit me. A couple of police got out of the vehicle and began to swear at us. They make us lean against the car and then took us into the car. They separated us when we arrived at the police department building. Police asked me to tell them where PKK members were hiding. They began to beat me when I told them that I know nothing about them. This torture and insult lasted 40 minutes and finally we were released. We went to hospital following the incident and I had medical report which proves beating.”

According to Yildiz, the police from same station came to the hospital to take them one more time but he refused to go with them. On the other hand hospital stuff didn’t give the medical report to the two men after the police’s arrival. The report is supposed to have been sent to the prosecutor by the hospital management.

Servet Yildiz applied to the Prosecutor of the Republic of Gevas to file a criminal report about police officers, following the case.