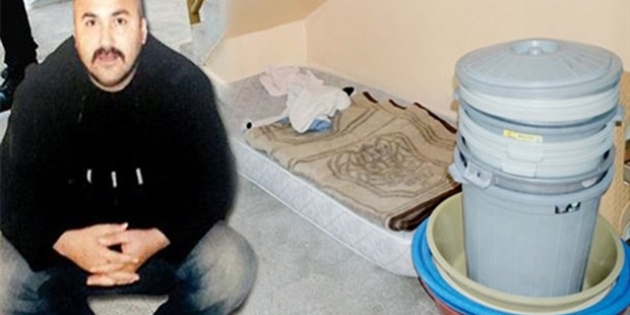 A telephone conversation regarding 40-year old Kurdish prisoner in Balıkesir’s Kepsut prison beaten to within an inch of his life has revealed recently that Turkish police and guardians turned a blind eye to the murder. A cellmate of Kurdish prisoner who made a telephone conversation with his mother showed that Turkish police and prison officers blinked the beating in the killing by a group of racists, online news portal Aktif Haber reported.

It is reported that Kurdish prisoner Ulaş Yurdakul who was forced to sleep under the stairs was exposed to severe treatment and beating by a group of racists in the cell for months due to frequently wetting his bed. He lost his life as a result of maltreatment and beating by a group of men led by the ward headman Nihat Şen and his seven men allegedly. The severe treatment continued until January 2, 2017 when he was taken to the hospital after getting a beating.

The tape recording between prisoner İbrahim Armağan and his mother on January 3, 2017 was appended to the case, while the investigation was ongoing. It indicates that Armağan and his seven friends led by the ward headman Nihat Şen beat the victim to death, and one of them, Serkan Evran, took the rap for killing Yurdakul.

In reference to attitude of the police officers and guardians, the conversation shows they also had a role in the murder by blinking the maltreatment and punishment in the murder. Armağan stated that they killed one of Kurds here in prison by using a slang tone. In response to his mother’s question, he stated that the police also had a role in the incident.

After the death of Yurdakul, the delegation was informed by Nihat Şen. At the end of the investigation, Serkan Evran took the responsibility for the crime.

In the statement of his cellmate Emre Ersoy, he told that Nihat Şen, Mehmet Alkan, İbrahim Armağan, Recep Okumuş, Serkan Evran, Bülent Kocaman, İdris Çakmak and Murat Sevim began to beat the victim at around 01:00 a.m. until 04:00 a.m.

“İdris Çakmak started to wash him in the bathroom. Just then Nihat Şen beat him with mop. They again brought him in the room and I heard beating sounds”, Ersoy told.

Another prisoner Özcan Kanar said, “He was entering the ward two times for the census. Ulaş was constantly beaten, and it was obvious from his face. It was necessary to understand that the officers who came to the visit should have understood by looking his face.”

Murat Sevim, who is allegedly one of Nihat Şen’s men, accused the prison officers and told, “Şen said to the officers, ‘If you do not beat them, they do not start behaving sensibly. He wet himself again. I will beat Ulaş again in the evening. The officer said, ‘At least do not hit his face, it should not become visible.”

Although the statements of the prisoners were known that Yurdakul had been beaten for nine months, it was decided that there was no reason to prosecute the guardians. According to Hürriyet daily, there has been any case open yet while the investigation about the killers.

Mehmet Alkan, one of the prisoners sentenced after the lynch, claimed that the guardians were aware of Yurdakul’s situation, saying “A week and a half ago, Ulaş got a black eye. The officers who saw him in the evening census said ‘Makeup is very nice.”